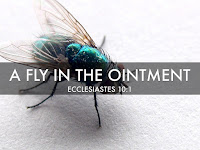 A lot has been said and written about the Australian ball-tampering scandal in the last 3 days. If you have no clue about what I have just said, then check out some of the news channels - it is all over the news. Anyway, as I was doing my Lenten reading this morning, I used Ecclesiastes 10 as my text. I hadn't even got passed the first verse when my mind when racing back to Steve Smith's actions.

"As dead flies give perfume a bad smell,
so a little folly outweighs wisdom and honour.
2 The heart of the wise inclines to the right,
but the heart of the fool to the left.
3 Even as fools walk along the road,
they lack sense    and show everyone how stupid they are." - Ecclesiastes 10:1-3

One moment of madness is now like a 'dead fly' in the ointment of Smith's cricketing career. He is considered to be one of the best batsmen in the world, and he had a fairy good track record as a captain, yet that 'little folly' tarnishes all his previous honours and achievements.

Personally, I think that Steve Smith needs a little grace at a time like this. Don't get me wrong, I enjoy seeing the Aussies beaten at their own game, just like many of us do, but the reason why I am suggesting a little 'grace' for the man is because of our definition of 'grace.' Remember, GRACE is undeserved merit or favour. We are all quick to hold onto God's gift of Grace for us, when we have messed up with the sin in our lives, so let us offer the same to those who sin more publicly. We should just grateful that our sins are not viewed millions of times over.

So, Steve Smith will be held accountable for his actions, and rightly so. In the same way, we are also accountable for our actions and when we have erred we need to make amends. However, as Christ-followers we know that the only way we can be restored is through the mercy and Grace of Jesus.

Let the folly of one man be a lesson to all of us, but then we should also allow the Grace of another man (Jesus) be a GIFT to all.

Lent is the time to speak of, and reveal God's Grace.