19 - Stephen Hawking on the Universe 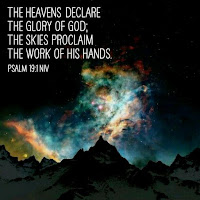 Stephen Hawking passed away this week at the age of 76. He was well known for his contribution to Science and our understanding of the Universe. In an interview with CNN in 2010 he is quoted as saying:
"God may exist, but science can explain the universe without the need for a creator."
Later on in that same interview he said that "The scientific account is complete. Theology is unnecessary."
Well, we are all entitled to our own opinions, but I still believe in a Creator and although I can't explain everything about the Universe I am content that 'the heavens proclaim the glory of God.' I join the song of the Psalmist who sings:

"The heavens proclaim the glory of God.
The skies display his craftsmanship.
2 Day after day they continue to speak;
night after night they make him known.
3 They speak without a sound or word;
their voice is never heard.
4 Yet their message has gone throughout the earth,
and their words to all the world.

God has made a home in the heavens for the sun.
5 It bursts forth like a radiant bridegroom after his wedding.
It rejoices like a great athlete eager to run the race.
6 The sun rises at one end of the heavens
and follows its course to the other end.    Nothing can hide from its heat." - Psalm 19