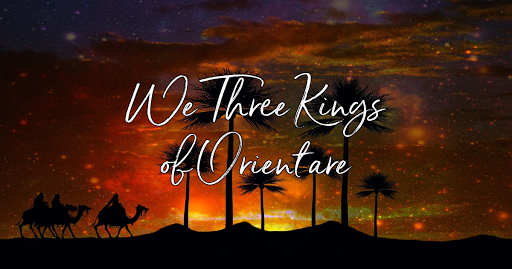 The beloved Christmas carol, We Three Kings was written by an extremely gifted minister by the name of John Henry Hopkins Jnr. Not only was John an author, but he was also a book illustrator, a stained glass window designer, clergyman, songwriter and editor of the New York Church Journal. It is believed that Rev. Hopkins wrote We Three Kings for an 1857 Christmas pageant put on by the General Theological Seminary of New York City. In 1863, he also published this carol in his book Carols, Hymns and Song.

The story line of the song is based on a story from Matthews Gospel, telling of the Magi who travelled a long distance (most likely from Persia), guided by a bright star to see the child Jesus, the one who was hailed as the promised Messiah. “And when they were come into the house, they saw the young child with Mary his mother, and fell down, and worshipped him: and when they had opened their treasures, they presented unto him gifts; gold, and frankincense and myrrh.” - (Matthew 2:1-2) We three kings of Orient are
Bearing gifts we traverse afar
Field and fountain, moor and mountain
Following yonder star
We three kings, we three kings

I am challenged by the fact that Jesus drew all kinds of people to himself and the Magi in this story are no exception. There were/are so many people looking for some kind of light and salvation in their troubled lives. As I reflect on the Christmas story again I am humbled that it is in the Christ Child that I have found the perfect light.

NOTE: If there is a Christmas song/carol you would like me to blog about please send me a message - I would love to hear your favourites and share them with others.