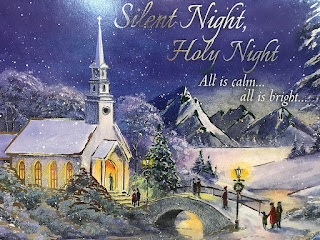 The story behind the popular Christmas carol Silent Night, reminds me that God works in ways that are beyond our human understanding. This song was initially written as a poem and then set to music for a Christmas Eve service in a small Austrian village. The country had endured years of wars, suffering and constant strife. There was a deep longing for the peace of God to prevail, which sounds almost exactly the same as living in 2020.

I am struck by the fact that when I confront obstacles in my life I usually feel as if ‘my plans’ are being messed up. However, I need to develop the faith to know that God is always up to something and that God can truly bring order out of our chaos.

This simple hymn has gone on to bring much solace and encouragement to many broken spirits over the last 202 years. It has been translated into over 140 languages and will surely be sung well into the next Century.

If you are interested, here is the story of Silent Night as told by the author on www.german-way.com

On a cold Christmas Eve in 1818 pastor Joseph Franz Mohr walked the three kilometers from his home in the Austrian village of Oberndorf bei Salzburg to visit his friend Franz Xaver Gruber in the neighbouring town of Arnsdorf bei Laufen. Mohr brought with him a poem he had written some two years earlier. He desperately needed a carol for the Christmas Eve midnight mass that was only hours away. He hoped his friend, a school teacher who also served as the church’s choir master and organist, could set his poem to music. And one of the many amazing things about this carol is that Franz Gruber composed the “Stille Nacht” melody for Mohr in just a few hours on that December 24, 1818.

Recent flooding of the nearby Salzach river had put the church organ out of commission, so Gruber composed the music for guitar accompaniment. A few hours after Gruber finished his composition, he and Mohr stood before the altar of the St. Nicholas Church in Oberndorf to perform their own work. A local choir group backed them up as the sounds of the brand new carol broke the silence of that “Stille Nacht.”