Angels from the realms of glory 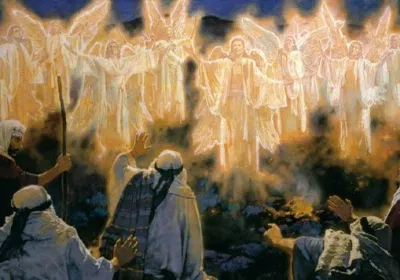 James Montgomery (1771-1854) is often considered to be of the same ilk as hymn-writers, Isaac Watts and Charles Wesley, which is a huge compliment in my books. Many of our hymnals will contain a number of Montgomery’s songs, with Angels from the realms of glory sure to be in most of these.
British hymnologist J.R. Watson states, “James Montgomery was a well-known poet, highly thought of by his contemporaries such as Shelley and Byron.” Montgomery’s father was a minister, and his parents served as missionaries to the West Indies at one point in their ministry. He remained in Yorkshire, and from age 6 was raised in a boy’s boarding school. James later said, “There, whatever we did was done in the name and for the sake of Jesus Christ, whom we were taught to regard in the amiable and endearing light of a friend and brother.” It is believed that Montgomery began writing poetry from a young age (around 10). He was not so great with the rest of his academic schooling and dropped out of school at 14. He later found a job in 1792, working at the radical weekly newspaper, the Sheffield Register, which later became the Sheffield Iris. James served as the editor of this publication for 31 years.
“Angels from the realms of glory” was first published on Christmas Eve 1816 and is enjoyed for its sense of anticipation and excitement of the birth of Jesus (www.umcdiscipleship.org).