It came upon the midnight clear 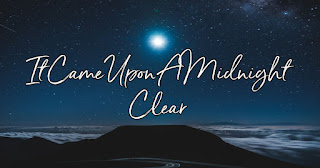 When Edmund Sears wrote the words of It came upon the midnight clear I am sure he had no clue that we would still be singing this song 200 years later. Rev. Sears, along with many other people, was dealing with great social strife in America as the Civil loomed in their future. His words in the poem, which became a hymn, sought to offer a solace to people and to point them back to the comforting words of God.

It came upon a midnight clear was first printed in a Boston publication, Christian Register, which was published on 29 December 1849. I think verse three (3) gives us a clear insight in his concerns about the social situation in the U.S.A and likewise speaking into our own times:

“Yet with the woes of sin and strife
The world has suffered long;
Beneath the angel-strain have rolled
Two thousand years of wrong;
And man, at war with man, hears not
The love-song, which they bring:
O hush the noise, ye men of strife,
And hear the angels sing!”

The gift of this song is that it speaks directly into our context, as much as it did in Edmund’s time. How sad that we are still at war with each other and with God (man, at war with man, hears not), so the challenge to hear the voices of Angels is just as relevant.

Advent gives us the opportunity to listen to the call of God and to respond to God’s overtures of love. The glorious song of old is there to remind us that God can still bring Peace on Earth to all people.

Luke 2:14 - At once the angel was joined by a huge angelic choir singing God’s praises: Glory to God in the heavenly heights, Peace to all men and women on earth who please him.