Once in Royal David's City 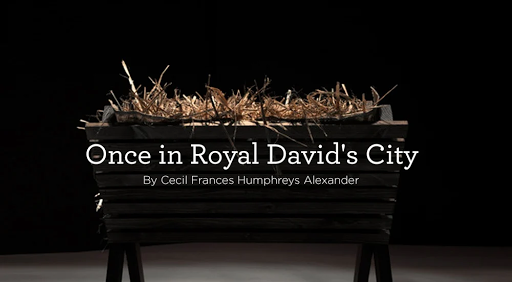 I have many childhood memories of Christmas and especially of the songs and carols we used to sing. I think that Once in Royal David’s City must take me back around 40 years or so. Once in royal David’s city, stood a lowly cattle shed, where a mother laid her baby,
In a manger for His bed: Mary was that mother mild, Jesus Christ, her little Child.

There is something equally majestic and intriguing about this hymn and if I were to choose the ‘best’ verse from this song, I would suggest that the last verse is the most profound (for me).

And our eyes at last shall see Him, Through His own redeeming love; For that Child so dear and gentle, Is our Lord in heaven above: And He leads His children on, To the place where He is gone.

It is the thought that Christ leads us all to the place he has gone that fills me with hope and expectation. This resonates with the words of John 14, where Jesus reassures his disciples that he has gone ahead to prepare a place for them. I don’t know what that place will actually look like, but it is enough for me that Christ himself will be there.

Once in Royal David’s City first appeared in a collection, Hymns for Little Children in 1848. What makes this hymn unique is that it is one of only a few hymns to be written by a woman and to be recognised for its true merits. In an era when many women struggled to receive a public platform, Cecil Frances Alexander (1818-1895) succeeded.

“She was born in Dublin, Ireland, and began writing in verse from an early age. She became so adept that by the age of 22, several of her hymn texts made it into the hymnbook of the Church of Ireland. Alexander [née Humphreys] married William Alexander, both a clergyman and a poet in his own right who later became the bishop of the Church of Ireland in Derry and later archbishop. Aside from her prolific hymn writing, Cecil Alexander gave much of her life to charitable work and social causes, something rather rare for women of her day” (www.umcdiscipleship.org)