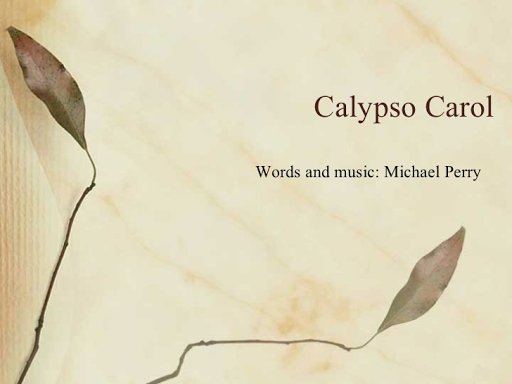 There is a certain element of fun, joy and exuberance in the Calypso Carol that always brings a smile to my face.

See him lying on a bed of straw:

a draughty stable with an open door;
Mary cradling the babe she bore
the prince of glory is his name.

O now carry me to Bethlehem
to see the Lord of love again:
just as poor as was the stable then,
the prince of glory when he came.

This modern Carol was written by Michael Perry during the 1960’s (probably 1964) and has often been introduced on radio as a folk carol with West Indian influence. The fame of this particular carol has even prompted the Caribbean island of Nevis to put certain words from the song onto their local postage stamps.

What is even more interesting is that the Calypso Carol came to fame almost by accident. Michael Perry apparently composed the original tune for a college carol show, never intending it to become so popular. A local musician, by the name of Cliff Richard (yes, the Sir Cliff) was putting together a selection of songs for his radio show and needed a song to fill in a gap. He ended up choosing the Calypso carol and it got such a positive response that people began requesting it.

The BBC program Songs of Praise invited it’s viewers to vote for their preferred carols throughout the year 2005. Many thousands of people cast their votes and the Calypso Carol was one of the top 10 choices, for that year. These 10 Carols were then sung at the Christmas Concert (2005) held at the Royal Albert Hall. I am sure that this only helped to spread the popularity of this catchy tune.

For me, the key verse is the last one (verse 4). It speaks of the tremendous gifts we are given through God’s generous gift of his son, Jesus (Matthew 2).

Mine are riches, from your poverty,
from your innocence, eternity;
mine, forgiveness by your death for me,
child of sorrow for my joy. (Michael Perry (1942 - 1996)

God bless you all