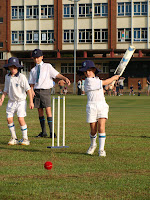 Last night I watched South Africa lose the T20 semi-final - it seemed inevitable, I guess. Anyway, I watched until the 'bitter-end' and then casually flicked through the channels until I came to the Soccer. Sounds pretty ordinary, hey? Well, here is the thing - I was a little sad that we lost the cricket, but my attitude was 'well, that's life!' That's when it hit me that my attitude towards the outcome of sporting games is slowly mellowing - at last! Or maybe I am just getting old....no, that can't be it!

I still remember tossing and turning in my sleep the night we lost in the semi-finals of the 1999 World Cup cricket. That night I thought I was going to go crazy - I kept re-living that last disastrous run-out, even dreaming that I was playing and that I had made the run and we had won. The days that followed that event left me feeling bleak. The same thing happened after we lost the Super 14 final in the dying seconds - bleakness and disappointment.

In the end - we all realise that Sport is not 'Life' - in may ways, it is a glorious escape from Life and I see no harm in enjoying ourselves through sport. However, for me, it worried me that often I would be more 'gutted' and 'bleak' after a sporting loss than I was about some forms of injustice.

So, in the end, I think that God has been quietly doing a work in me - and I am slowly seeing the 'bigger' picture. So, we lost a cricket game! Life goes on and I managed to lose no sleep - yeah!

Let His Grace change our hearts. The more we allow His grace to pour into our hearts the more He will deal with our sin.
Living in Grace,
D3LM3
Posted by Delme Linscott at 08:17