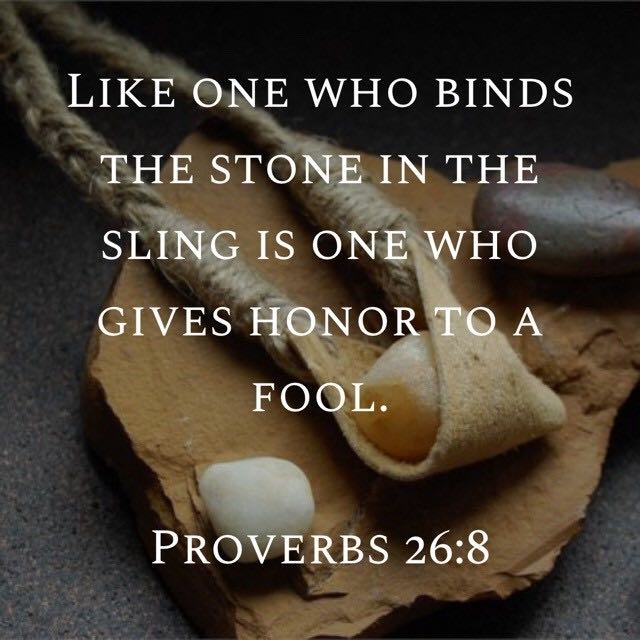 Today's group of proverbs take on an interesting meaning where Solomon uses vivid images to help people understand his wisdom. He makes use of everyday objects to draw peoples attention to the issue at hand - that a fool will just never listen. He uses the image of a sling, a thorn-bush and an archer, among others.
"Sending a message by the hands of a fool    is like cutting off one’s feet or drinking poison.7 Like the useless legs of one who is lame    is a proverb in the mouth of a fool.8 Like tying a stone in a sling    is the giving of honor to a fool.9 Like a thorn-bush in a drunkard’s hand    is a proverb in the mouth of a fool.10 Like an archer who wounds at random    is one who hires a fool or any passer-by." - Proverbs 26:6-10
Which one of today's verses rings a bell for you?
“There are two ways to be fooled. One is to believe what isn't true; the other is to refuse to believe what is true.”― Soren Kierkegaard
“Any fool can criticize, complain, and condemn—and most fools do. But it takes character and self-control to be understanding and forgiving.” - Dale Carnegie
Living in Grace
D3LM3
Posted by Delme Linscott at 12:20