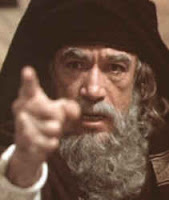 I just heard on the news that the ANC don't believe that the slogan "Kill the farmer" is classed as hate speech! That's interesting! I am not sure if they think that the rest of South Africa is totally stupid or what, but the last time I checked, trying to incite any human being to kill another person is 'Hatred' in it's purest form.

Look, I am no politician, but I just wanted to remind the ANC (and anyone else who had forgotten) that 2000 years ago, there were a crowd of people that shouted this slogan...

But hey, I am sure that the Pharisees, Chief Priests and Teachers of Law, weren't really meaning to kill Jesus - they just wanted to express themselves in a slogan that could unite them and allow them a voice....
...whatever!

We all know that the chants of the crowd, incited by their leaders, eventually got Jesus nailed to a cross. Perhaps the politicians want to do their own reflection this Easter and re-think the consequences of their own chants and slogans. Enough people are dying!

For us, the common people in the street, let's also beware lest our words inflict pain on others.

P.S. Forgive my political rant.
Posted by Delme Linscott at 20:19

Don't need to forgive your political rant. I appreciate it and Christians need to say these things out loud. Thanks!

I was so mad I couldn't write anything.