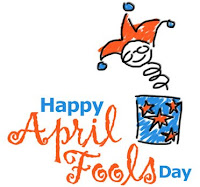 Apparently the earliest recorded association between April 1 and foolishness can be found in Chaucer's Canterbury Tales, written in 1392 (so says wikipedia). Every year thousands of people are caught out by practical jokes, hoax stories and ludicrous announcements. Watch out for them!

The torture and death of Jesus Christ will never be a joke, although some try to discredit Jesus. The agony that He went through was real.

His Resurrection is also not a hoax, although skeptics try to distract us from the triumph of the empty tomb. People can call me a fool for following Jesus, but that's alright - I have been called worse things!

1 Corinthians 1:18 - "For the message of the cross is foolishness to those who are perishing, but to us who are being saved it is the power of God."