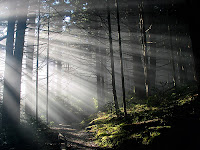 In the ancient Roman world, victorious Generals were allowed their own 'ticket tape parades' through the streets of Rome, where they proudly showed off their captives and wagons filled with treasure. However, as they were riding through the streets there was always an officer who would stand alongside the gloating General. His job was to whisper constantly into the Generals ear, "You are but a man! You are but a man!"

This links in with the words of the Psalmist,
"Do not be overawed when a man grows rich,
when the splendor of his house increases;
for he will take nothing with him when he dies..." - Psalm 49:16-17

In Latin, it was said, Sic transit gloria mundi, meaning "Thus passes the glory of the world".

It is easy to get to attached to the things of this world, but in the end it is only the Eternal things - the things of God that will count.

What do you think?