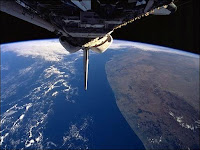 This story may be for you this week. Read it and see what God might be saying to you:

George McCauslin was a director of the YMCA. Some years ago, he was serving at a YMCA that was losing members, it had financial difficulties and terrible staff problems. George found himself working 85 hours a week. He was getting little sleep at night, and he took little time off. When he was off, he was worrying and fretting about the problems of this YMCA.

A counsellor told George that he was on the verge of a nervous breakdown. He had to learn somehow to let go and somehow to let God into his problems. He didn’t know quite how to do that.

So George took an afternoon off, took a pad and paper, and took a walk in the woods. As he walked through the cool woods, he could just feel his tight body and his tight neck start to relax. He sat down under a tree and sighed. For the first time in months he relaxed.

He got out his pad and paper, and he decided that he would let them go, the burdens of his life. He wrote God a letter. He said, "Dear God, today I hereby resign as general manager of the universe. Love, George."

He then said, smiling, "And wonder of wonders, God accepted my resignation."

Let’s quit managing the Universe and let God do what God does best. Have a little faith in God to make a plan!

Thanks for the reminder about who is ACTUALLY in control!!

Hi Delme
I am sure that I am not alone in finding it hard to give over control. I often find my mind set to be " if I do it, it will be done right". Not always the case I might add! I will give it a whirl.