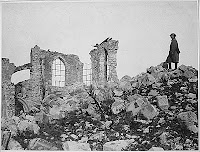 Over 60 years ago Catholic Air Force Chaplin, Father George Zabelka blessed the men who dropped the atomic bombs on Hiroshima and Nagasaki. Over the next two decades, he came to the realisation that he had been terribly wrong in lending moral and religious support to the bombings. In a speech, just before his death, Father Zabelka left this message:

"All I can say today is that I was wrong. Christ would not be the instrument to unleash such horror on his people. Therefore no follower of Christ can legitimately unleash the horror of war on God's people...All I can say is: I was wrong!
...to do otherwise would be to bypass the first and absolutely essential step in the process of repentance and reconciliation: admission of error and admission of guilt."

Now there is a thought - someone who is willing to admit they make a massive mistake. When last did we admit to making wrong choices & judgements? When last did we get to say 'sorry' and really mean it?

P.S. I got this quote from Shane Claiborne's book 'Jesus for President.'
Posted by Delme Linscott at 21:11