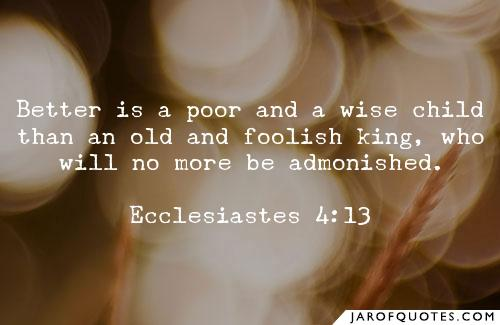 Making any plans for succession can be tricky. This can apply in all spheres of industry, business, church or family. As Solomon comes to the end of his reign he muses over what will become of his legacy and those who will succeed him.

"It is better to be a poor but wise youth than an old and foolish king who refuses all advice. Such a youth could rise from poverty and succeed. He might even become king, though he has been in prison. But then everyone rushes to the side of yet another youth who replaces him. Endless crowds stand around him, but then another generation grows up and rejects him, too. So it is all meaningless—like chasing the wind." - Ecclesiastes 4:13-16

Remember that Solomon uses a technique of comparisons in his reflections. He suggests that if you had two people standing alongside one another - a poor youth and an old king - the younger person is better off because he still has time to learn and become a better person. Even young people who start off with many disadvantages have more hope than an older person who doesn't want to change.

However, the reign of the young person will also come to an end at some point. People will then rush to the new 'flavour of the month' and forget the first youngster. This is confusing and meaningless to Solomon, because we so often chase after fame and recognition believing it will answer all our desires. He says IT WON'T!

It serves as a humbling reminder that our personal legacy will never outlive the lasting legacy of Jesus.