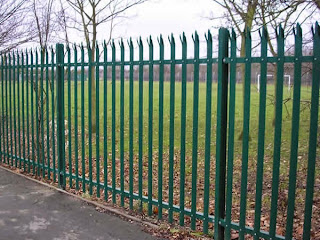 Recently we noticed that our palisade fence was showing signs of rust. It was tempting to ignore the rust and pretend that it wasn't there, but we knew that something had to be done about it. So, we set about sanding the fence and getting as much of the rust off as we could. Then we had to wash the fence, before we began to paint it with some anti-rust.

Obviously, this all takes time and we aren't even finished yet! Yesterday as we were painting over each spot of rust I was reflecting on whether there was a quicker way of doing the job. And I realised there isn't. The only way to do the job correctly is to do it one pole at a time. It is laborious, but there is no short cut!

In our faith, we are sometimes painfully away that there is some rust developing. We can ignore it and pretend that it doesn't exist, but in the long run it will 'eat' away at us and we will be broken. The only way to remain strong and 'rust free' is to do things step by step, day by day, pole by pole. There can be no quick short cuts when it comes to living out our faith. Sometimes developing a sturdy faith takes years of doing the small things properly.

So, next time you are tempted to ignore the problems in your faith, don't! They won't go away on their one. Be honest about them and get to work on them, one 'spot' at a time. Ask a friend to help you and be accountable to each other, as you seek to remain strong.

May God bless you today.
Living in Grace
D3LM3
Posted by Delme Linscott at 10:32