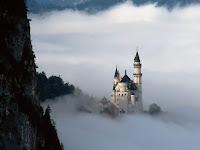 Advent reminds us that the birth of Jesus is no fairytale made up for little children. Sure, the details around his birth may be debated by some, but the one thing that even historians can't avoid is that Jesus existed. His birth changed the face of religion and his life is still impacting lives today.

"Now there was about this time Jesus, a wise man, if it be lawful to call him a man; for he was a doer of wonderful works, a teacher of such men as receive the truth with pleasure. He drew over to him both many of the Jews and many of the Gentiles. He was [the] Christ. And when Pilate, at the suggestion of the principal men among us, had condemned him to the cross, those that loved him at the first did not forsake him; for he appeared to them alive again the third day, as the divine prophets had foretold these and ten thousand other wonderful things concerning him. And the tribe of Christians, so named for him, are not extinct at this day."

Josephus had nothing to gain from writing these words - as an historian he could not deny that Jesus existed. People in today's world can respond to Jesus how they like - they can deny him, they can refuse to worship him, but they can not refute his existence.


May Jesus Christ be REAL for you this Advent season.