Watch out for the mule! 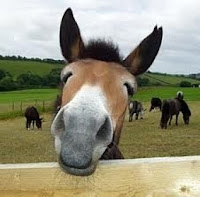 “A mule dressed in a tuxedo is still a mule.”-Traditional saying.

Our society is so focused on the 'visual' that we seldom take time to get to know the true
character of other people. We can make quick judgements of others and then live to regret those  snap
decisions.

The saying above, also reminds me that sometimes people try to disguise who they truly are, but in the
end their true character still shines through. Of course this doesn't mean that 'mules' can't be changed
through the grace of Christ, but we should exercise caution when only noticing  the outward
appearance of people.

1 Samuel 16:7 - But the Lord said to Samuel, “Don’t judge by his appearance or height, for I have rejected him. The Lord doesn’t see things the way you see them. People judge by outward appearance, but the Lord looks at the heart.”