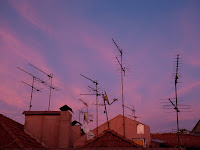 This may seem like a silly question, because most of us who have a TV will have either an aerial or a dish - it's pretty obvious. However, it seems that it isn't like this all over the world! Michael Cassidy shared a powerful story of how a village in South America had many TV aerials, even though the community was dirt poor. When Michael asked his interpreter why the villagers could afford TV's, but not food and clothes, he was told:
"TV is a huge status symbol in this community. If you are thought to own a TV, then people think you have made it. Most people save up money to buy an aerial first, so that others 'think' they have a TV, but in fact most people don't even own one."

How true is this story of our lives too? We try to pretend that we have everything all together or that we are religious or that we have money, but we are actually hiding the truth. In the end, no matter what 'aerials' we may put up to lie to others, God knows our hearts.

Perhaps it's time to get honest with Jesus. I am just saying....