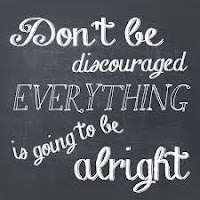 Ezra records how the people of Israel had to deal with lots of trouble and hardship as they tried to rebuild the Temple. There were people who pretended that they wanted to help, but actually just wanted to distract and disrupt the good work. These local residents did all the could to DISCOURAGE the people of Judah, but in the end God helped them to finish the task.

Then the local residents tried to discourage and frighten the people of Judah to keep them from their work. 5 They bribed agents to work against them and to frustrate their plans. This went on during the entire reign of King Cyrus of Persia and lasted until King Darius of Persia took the throne." - Ezra 4:4-5

So, next time you are discouraged from your task or other people tried to distract you, remember who you are doing it for and trust in God's protection. Even though people may try and frighten us from the work, we need to persevere until the end!

No plans of God can be frustrated!