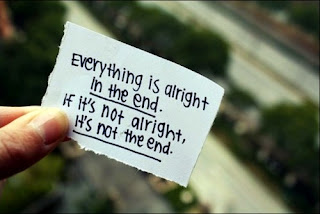 What happens in the end, is really important! This covers all facets of our lives - we must simply avoid making judgements before the 'End' comes. Take as an example, the brilliant victory for the Sharks Rugby team this past weekend. 15 minutes into the game and every Sharks fan started to wonder how much we would lose by? Playing against the Crusaders with 15 men is hard enough, but trying to beat them with 14 is nigh impossible. Needless to say, when the team was reduced to 13 men later on in the game, everyone assumed.....Game Over! However, we now know that somehow the Sharks managed to pull off a miraculous victory - It's written in the history books for all to witness!

So, when Job looked at his dismal life, he was persuaded by his cynical friends to right God off. They told him to pack it all in and to turn is back on God. But Job refused. He knew something that we should all learn - it is not finished until God says so!

May this truth fill your heart with gladness and joy. In the end, God is triumphant. God is always the last one standing.

"Everything is alright in the end. If it is not alright, then it is not the end!" - Unknown