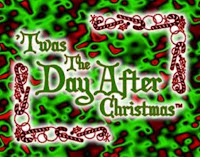 Do you know why the day after Christmas is sometimes called "Boxing Day?" It is NOT called Boxing Day because children end up 'boxing' each other over their Christmas presents, as someone once suggested (which is not a bad guess, though!)

It was named Boxing Day because wealthy people would 'box' up some gifts and take them to the poor in their community, the day after Christmas. I guess, the fact that we call it the 'Day of Goodwill' in South Africa is also a good way of expressing love towards others.

So how has your Boxing Day been? Has it been filled with 'boxing' or with Goodwill?

As we brace ourselves for the New Year, let's take a leaf out of Mary's book...

“But Mary treasured up all these things and pondered them in her heart.” – Luke 2:19