In Honour of October 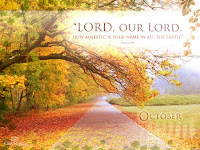 October is an interesting name to give the 10th month of the year, especially seeing that October comes from the word "Octo" meaning eight! The reason for this is quite simple really. In the old Roman calender it was the 8th month, but when the new Julian and Gregorian calendar was introduced it retained its name, even though it became the 10th month.

So, in honour of "October" I offer you the wonderful Psalm 8. These words are fitting to honour the Lord any month of the year.

O Lord, our Lord, your majestic name fills the earth!
Your glory is higher than the heavens.
2 You have taught children and infants
to tell of your strength,
silencing your enemies
and all who oppose you.

3 When I look at the night sky and see the work of your fingers—
the moon and the stars you set in place—
4 what are mere mortals that you should think about them,
human beings that you should care for them?
5 Yet you made them only a little lower than God
and crowned them with glory and honour.
6 You gave them charge of everything you made,
putting all things under their authority—
7 the flocks and the herds
and all the wild animals,
8 the birds in the sky, the fish in the sea,
and everything that swims the ocean currents.
9 O Lord, our Lord, your majestic name fills the earth!