What makes your blood boil? 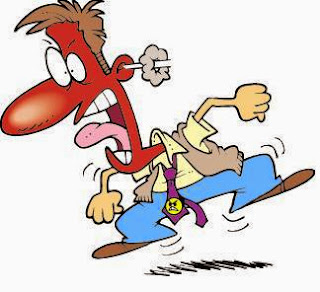 So, what makes your blood boil? What makes you so angry that you could do something drastic?

This morning I was driving the kids to school and we always have to turn across a busy intersection. Everyday we see cars jump the red traffic light and today was no different - in fact, in the space of a few minutes we saw 2 cars do it and both times nearly caused an accident (the second time, it was our family who were nearly wiped out by a dangerous driver). This makes my BLOOD BOIL! There is no law and order any more and sadly some innocent people will die at that intersection soon.

So, what makes your blood boil?

The fact that 4 Rhinos are killed every day in South Africa.
That our National leaders are spending 4.5 Million on their SONA after party?
That 21 000 people die from hunger-related causes daily, most of them are children?
That fundamentalists kill thousands of innocent civilians in the name of "religion?"?
That Eskom CEO's will still get massive bonuses despite being totally "shocking" at their jobs?
That food prices continue to rise, despite the fuel price decreases?
That women and children continue to be abused, raped and violated in our country?
That around 85% of our population follow some kind of faith and yet we have such a high rate of crime and corruption in our country?

The bible tells us that there were a few things that made Jesus' blood boil too. The incident in the temple is a prime example. When Jesus was angry with something, it was always about an injustice that was taking place - and he was willing to correct this.

"So he made a whip out of cords, and drove all from the temple courts, both sheep and cattle; he scattered the coins of the money changers and overturned their tables." - John 2:15

As you reflect on this today, may the Spirit of God prompt us to do something constructive with our discontent. Perhaps we are the ones who can start making a difference?!